“Even if the world is beating you down, walk tall and walk with your head upright.” 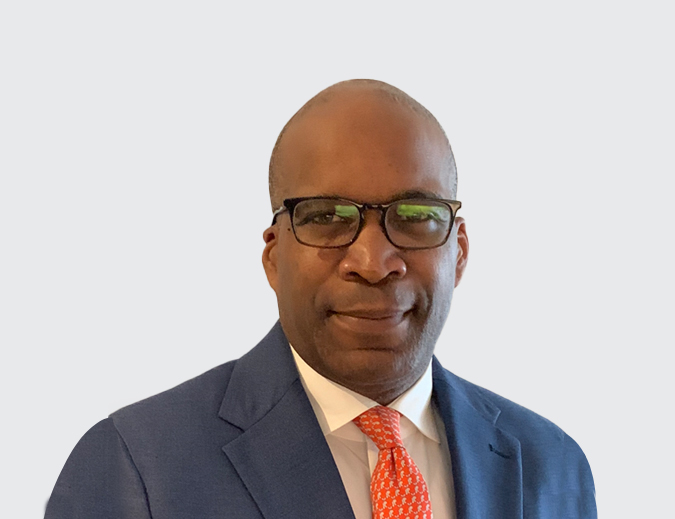 When you grow up the youngest of six boys in Brooklyn, you don’t think about becoming the first of anything––especially not becoming the Managing Director & Head of U.S. Government Affairs for MUFG.

However, this is the unlikely path Roger Hollingsworth has taken. The challenges he watched his mother overcome, shaped his character – defined by the values of hard-work, integrity, sense of family, and community.  He will tell you that his only goal was and remains, "honoring the sacrifices [she] made."

As a young man, Roger looked up to his brothers, teachers, and athletes like Jim Brown, Walt Frazier and Muhammad Ali. Later in life, he found himself gravitating to the words and readings of Maya Angelou, Thurgood Marshall, and James Baldwin. But his most unlikely inspiration was from what others saw in him. They saw the value of his potential. And while visiting his older brother in college, he saw a path that would allow him to see the world.

Mr. Hollingsworth’s greatest accomplishment to date is "going from a position of relying on government programs and support to helping craft legislation and public policy to provide others with the opportunity to pursue their American Dream.”  He points out that “the challenges people of color in America face – socio-economic, educational, nutritional and in terms of access to quality health care” are “innumerable” and notes the COVID pandemic, and the devastating impact it is having on communities of color. ”The conversation white American families have around the kitchen table regarding balancing checkbooks, building and maintaining good credit, and the economic and community benefits of homeownership has been ongoing for generations. In many instances, families of color are just beginning to have the ability, and opportunity, to pass on these important norms to our children.  But there’s a juxtaposition in having those conversations while still feeling the need to teach your child how to respond and react when they are pulled over by law enforcement or when they are being followed around in a department store.”

The North Star that guides Roger's efforts come down to one figure: his mother. His motivation is in honoring his mother’s sacrifice, emulating her work ethic and through his words and behavior paying it forward for the next generation. When he looks into the mirror, he asks himself, “What will you do to honor that?” His answer is, "I recognize that whatever accomplishments I have achieved have been on the shoulders, and because of the sacrifice of others. Given my life experiences, rare opportunities and access it is important that I be more than someone who has developed relationships to commoditize. It’s important, if not imperative, that I utilize whatever relationships I have to impact public policy in a manner that positively impact the lives, and opportunity, of others that extends beyond my professional responsibilities.” That’s the reason he wants to provide a redeeming value for a kid who might not see the potential in themselves, similar to the people that saw something in Roger early on. “Hopefully, the way I carry myself, in and outside of my home, is in a manner that they can appreciate and want to emulate and that my presence evokes a sense of hope that my path is obtainable and within their reach. So as I work to open doors for the next generation, they can push their way through.” And honestly, it still requires more. It’s not going to be easier. You still have to work a little harder. Stay a little later.

Today, Roger lives in Washington, D.C. where, as head of U.S. government affairs, he leads MUFG and Union Bank’s advocacy and policy engagement before White House officials, Congressional leaders, and relevant federal agencies.  His home is walking distance to the National Museum of African-American History and Culture (NMAAHC), a shrine to the nation’s civil rights and cultural pioneers, where his late mother’s name now sits on a wall listing the founding contributors of the museum, which advocates had fought for over a century. It is a lasting, and enduring legacy to her life’s journey in a building that honors the lives and sacrifices of so many other of Roger’s heroes and role models.

On another wall in that museum is a refrain Roger often cites when he speaks to students, community groups and the occasional young person he encounters who express frustration by what they perceive as the slow, and often unsteady, societal change taking place in America. It is a quote from a speech Dr. Martin Luther King Jr. gave at the National Cathedral in Washington, D.C. in March,1968.  Dr. King would give the speech, and utter the words, less than a week before being assassinated on a hotel balcony in Memphis, Tennessee.  They read:

“We shall overcome because the arc of the moral universe is long, but it bends toward justice.”

Whether it was Capitol Hill or in the corporate sector, Hollingsworth has been able to turn disadvantages into a clear advantage throughout his career. Today, he has an optimistic view of the future, in which he sees the torch being passed from past heroes like John Lewis and Martin Luther King, Jr., and being picked up by the young American poet Amanda Gorman and found in the community awareness and activism of athletes like Lebron James, are now redefining what it is to be American. “Today’s challenges are not found in the explicit nature of a segregated bathrooms or water fountains. They are often subtle, nuanced, and not easily explained. But to the extent they remain it is an important reminder that we must continue to do the work. In the words of the late John Lewis this is the “good trouble” necessary to bend the arc a bit more towards the more perfect union that was originally envisioned.