“Things don’t happen on their own. Getting to the next level is more than doing your job well.” 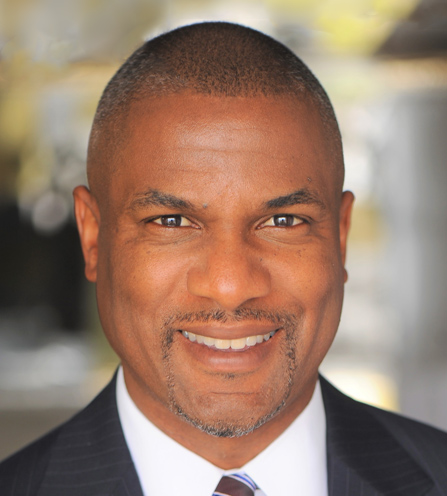 Mr. Ford joined Union Bank in 1993 as a Financial Services Officer. Over the years his responsibilities have included managing business development officers, underwriters, and portfolio managers. He became interested in finance and money through his father teaching him and his brother about the importance of wealth management and financial literacy.

As Gerald’s passion for banking grew so did his empathy and compassion for people in underserved communities. He admits “It’s probably one reason I've been at the bank for so long because the bank really has an interest in outreach and education of financial literacy starting at the high school level.” Gerald exclaims, “Doing corporate social responsibility work with the Union Bank Foundation is one of the more fulfilling parts of my job.”

He knows there’s a lot more work to do as an industry. “Education and outreach are just the beginning. The more diversity we can bring into the roles of lenders, especially on the sales side, and the outreach side, the more people can focus on making sure that capital is provided to underserved areas. Gerald looks at this as one way of being able to close the socioeconomic gap as well as build trust. “Hiring people that look like the community they serve and work in, offers the next level of success.” One way he’s helping is through the MUFG Union Bank Morehouse mentorship program. One of the important lessons he teaches his mentees is something he learned from his mentor, Former head of the Union Bank Foundation, Bob McNealy. Gerald states, "Bob was instrumental in helping me operate in the corporate environment, in addition to helping me connect with senior leadership and understanding the importance of reaching back to the next generation." Gerald tells his mentees, "Things don’t happen on their own. Getting to the next level is more than doing your job well.' To stand out you need to cultivate diverse relationships and create advocates in different areas, especially in senior management." Gerald practices what he preaches, as he became the first male on the board of directors of the YWCA in its 108 years of existence. He aligned with their mission of eliminating racism and empowering women. "Being involved with such a tremendous organization was one of the highlights of my career because they share the same goals and values I have and are a part of doing good things in the community.”

Community involvement and participation can be directly traced back to Gerald’s roots. He uncovered a link to famous contributors of Black History. His 5th great-grandfather, John Remond, was an abolitionist, and his 4th Great Uncle, Charles Remond, partnered with Frederick Douglass to help abolish slavery. They became so close that Frederick Douglass named his youngest son, Charles Remond Douglass. This research into his family created a heightened appreciation for Black History –– it spans generations.