The community development program, known as “Qualified Opportunity Zones,” was created by Congress as part of the Tax Cuts and Jobs Act of 2017. According to the Treasury Department, it was designed to “spur investment in distressed communities throughout the country” by offering investors tax incentives in exchange for capital investments into designated areas. Although the program went through some growing pains in 2018 and 2019 as its rules and regulations were being digested by both investors and fund managers, by 2020 investors seeking both the tax advantages and return potential of investing in Qualified Opportunity Zones had committed more than $12 billion (and as much as $75 billion) to Qualified Opportunity Funds.

The program offers compelling tax incentives for making long-term investments in low-income communities nationwide. Not only can investors defer and reduce the capital gains tax on assets sold to buy into an Opportunity Zone investment, but they can also eliminate all capital gains tax on the Opportunity Zone investment itself (subject to a mandated holding period.)  The program was enacted as part of the Internal Revenue Code, and only applies to Federal income taxes (not state income taxes).

The IRS has twice allowed additional time for QOZ investors to roll over realized gains due to the Coronavirus pandemic, the most recent announcement occurring January 19, 2021. This has created an unusual opportunity for many investors who realized a large capital gain at any time in 2020 to roll that into a QOZ investment by March 31, 2021 to defer the tax liability and secure the additional tax benefits of the QOZ plan.

The engine behind the legislation 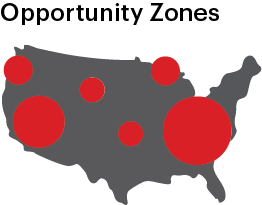 A “doing well by doing good” concept, the Opportunity Zone program was originally developed by the Economic Innovation Group, a think tank, to help address the growing economic inequality that has left many low income communities behind.

The idea was buoyed by a swell of support from a wide range of investors, entrepreneurs, community developers, economists and other stakeholders. It was then taken to Congress where it was championed by the bipartisan team of Senators who led a regionally and politically diverse coalition of nearly 100 congressional co-sponsors.

Following the spirit of the program, nearly all QOZs are in census tracts with a minimum 20 percent poverty rate or a median family income below 80 percent of the statewide median or metropolitan median. But there are some surprises. For example, some tracts adjacent to New York’s Central Park and downtown Los Angeles made the list of QOZs. This gives investors who want to put their money exclusively near highly developed areas of major cities many geographic opportunities to do so.

Rules of the road

Here's how the program works as codified by the Tax Cuts and Jobs Act of 2017:

The longer the investment is held, the sweeter the tax benefits.

The following scenario illustrates what effect the length of the holding period has on capital gains taxes:

Let’s say an investor has a $1 million gain on the sale of a stock and, based on a 23.8 percent tax rate, stands to owe $238,000 in capital gains tax. But instead of paying, the investor reinvests the $1 million gain in a QOF.

Taxes due on the original deferred gain will be realized subject to the 10 percent step-up (or 15 percent for QOF investments made by 12/31/2019) on the earlier of the sale of the investor’s interest in the QOF and December 31, 2026. It is important to note that the tax owed at that time will be based on the tax rates at that time (not today’s rates). 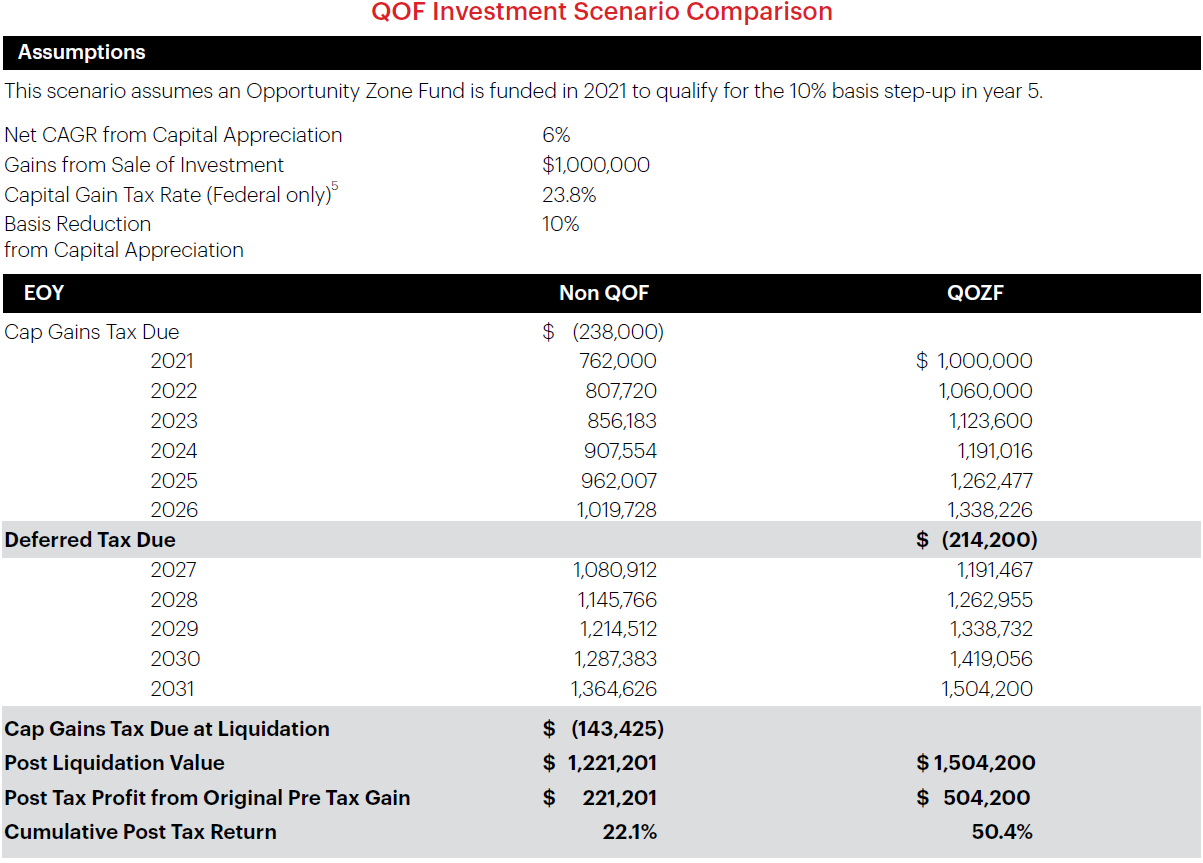 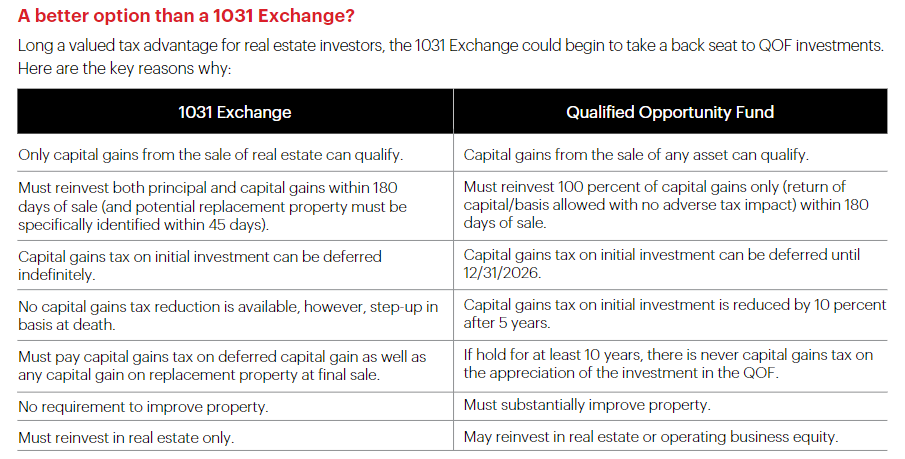 Although many established asset managers are seeking to raise eligible comingled funds to offer qualified investors, one of the biggest drawbacks will be the lack of a comparable performance track record to review.

In addition, owning a business interest in a lower-income area generally brings additional risk relative to more developed areas, as these areas tend to underperform in cyclical down turns.

Other concerns to consider:

Under the right circumstances, the compelling tax benefits of Opportunity Zone investments could be worth consideration. Be reminded that there are strict time limits for this program: after the sale of an asset, you only have 180 days to reinvest the capital gain into an QOF. In addition, per the current legislation, the ability to defer and reduce capital gains will sunset on December 31, 2026. This means that, in order to receive the 5-year hold basis step-up, you must reinvest by December 31, 2021.

Final regulations were published by the Office of the Federal Register on December 19, 2019. For the latest information on this topic, visit the U.S. Department of the Treasury or the Internal Revenue Service.

Wills, trusts, foundations, and wealth-planning strategies have legal, tax, accounting, and other implications. Clients should consult a legal or tax advisor.

This is a publication of The Private Bank at MUFG Union Bank, N.A. (the Bank). This publication is for general information only and is not intended to provide specific advice to any individual. Some information provided herein was obtained from third-party sources deemed to be reliable. The Bank makes no representations or warranties with respect to the timeliness, accuracy, or completeness of this publication and bears no liability for any loss arising from its use. Wealth planning strategies have legal, tax, accounting and other implications. Prior to implementing any wealth planning strategy, clients should consult their legal, tax, accounting and other advisers.