Borrowing from Winston Churchill’s famous phrase, Bitcoin, like other cryptocurrencies, is a “riddle wrapped in a mystery inside an enigma.” Given the meteoric rise and recent slump of Bitcoin, investors vigorously debate whether it is a currency, an electronic payment system, a uniquely uncorrelated asset class or simply a digital version of the Dutch Tulip Mania—history’s infamous market bubble. So what is the future of cryptocurrency? 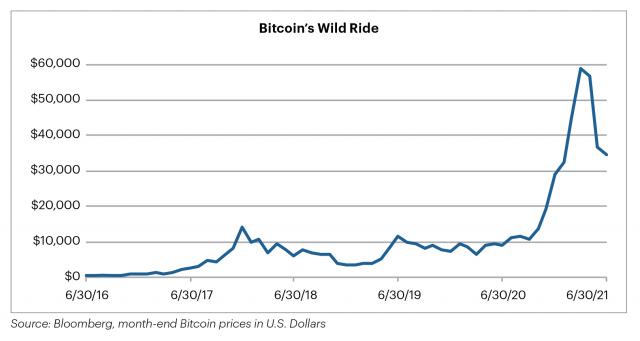 Bitcoin’s price chart appears to track many historical asset bubbles and busts and also carries a “this time it’s different” narrative like other bubbles. Typically, these bubbles are accompanied by new technology, loose credit, and a new worldview by a certain segment of the population.

Do cryptocurrencies have an intrinsic value? The original demand for Bitcoin seemed to be based on the notion that widespread money printing by governments would devalue traditional fiat currencies and that alternative assets might better hold their value. Gold has traditionally played such a role. But as a  currency, crypto, unlike gold, is ultimately competing against the government’s ability to print money and control its circulation. Competition against the government is generally a no-win proposition.

And while cryptocurrencies may bear some resemblance to gold, a key difference is agreeing on a common reference price. While there are nearly 100 publicly-traded gold mining companies in the U.S., there is one generally-agreed-upon gold spot price. But the thousands of crypto coins all feature individual prices making comparisons a daunting task. At last count there were over 5,000 cryptocurrencies,  prompting the Federal Reserve’s James Bullard to say that while cryptocurrencies may be useful to facilitate some transactions more easily than via fiat currencies, “we have a couple of thousand of these around, most of them are worthless.”

Cryptocurrency and Crime: Not as Secret as One Might Think

Complicating matters further is the widespread popularity of crypto coins as tender for drug dealers, hijackers and shadowy groups active in ransomware crimes. By one estimate, 46 percent, or $76 billion, of Bitcoin transactions between January 2009 and April 2017 were for illegal activity.

The Colonial Pipeline ransom demand, which led to gas lines reminiscent of the 1973 Arab oil embargo, only ended when the company paid 75 Bitcoins valued at more than $4 million to the hackers.

On a positive note, 64 of the 75 Bitcoins paid in ransom were recovered by the FBI in June. But the fact that the hackers laundered the Bitcoins through 23 separate crypto accounts didn’t help paint cryptocurrencies in a positive light. While some cheered the FBI’s ability to break the blockchain code, seeing it as good public relations for Bitcoin’s image, others may worry that anonymity, one of the key features of cryptocurrencies, had been compromised.

Lastly, what about cryptocurrency and climate change? Clients concerned about climate change should also know that digital coin creation requires significant computing power—by one estimate, creating thousands of crypto coins in 2020 used about 0.6 percent of global electricity usage or more than that used by the nation of Argentina in 2019. And if coin prices rise, “mining” new coins becomes profitable and electricity consumption, much of it in countries where electricity is coal-based, may lead to significant additional CO2 emissions.

To keep up with other countries, particularly China, that are developing central bank digital money, the Fed is studying the possibility of a “U.S. digital dollar” in conjunction with the Massachusetts Institute of Technology.  China, with its command-and-control economy, has already moved to preempt competition by cracking down on crypto coin mining, trading and use for transactions.

Should the Fed offer a digital dollar, Bitcoin and similar cryptocurrencies could face significant competition for their intended uses in consumer commerce and what is left could be pure speculation. One task for the Fed, and other central banks considering “stablecoins”, discussed in more detail below, is how to minimize the risk of criminals migrating to stablecoins as a preferred means of tender.

For now, the intrinsic value of crypto is difficult to assess even as we believe the underlying blockchain technology has the potential to be useful as a backbone of commerce down the road.

Even though cryptocurrency has frequently been in the headlines over the past year, it continues to remain largely a mystery to many. Below we answer some basic questions to help you unravel this enigmatic “new money” phenomenon.

Cryptocurrency refers to digital financial assets that are designed to be bought, sold and used to purchase goods and services via the internet. Unlike traditional currencies issued by governments, these assets exist only as entries in what is known as a “blockchain.” The most well-known crypto asset, Bitcoin, was invented in 2008.

What is a blockchain?

How are coins “mined”?

Mining refers to how coins are added to the blockchain ledger by finding a random number that solves an increasingly difficult math equation. When cryptocurrencies were in their infancy, the solutions, and the coins, could be obtained with a desktop computer. But as prices soared over the last few years, increasingly extensive and expensive computing power became required to mine. “Miners” are paid in both coins and transaction fees.

What are the types of crypto coins?

Bitcoin and other cryptocurrencies hold no underlying tangible asset. “Stablecoins,” on the other hand, attempt to peg their market value to some external asset, frequently the U.S. dollar. While some stablecoins hold proportional dollar reserves, some do not, raising concerns about their stability. Governments that are considering offering cryptocurrency, like China, would likely issue a form of stablecoin.

What gives Cryptocurrency its value?

While there are billions of crypto coins in circulation offered by thousands of vendors – all with different prices – the lion’s share of crypto’s market value is represented by Bitcoin. Bitcoin, and many other coins, trade on multiple exchanges which use bid/ask quotes to set current prices. Similar to the ups and downs of other asset prices, supply/demand and investor sentiment play important roles in cryptocurrency values. One significant difference, however, is that while many financial assets can increase supply through various means, the largest cryptocurrency, Bitcoin, will only mine new coins until a total of 21 million are in circulation. As of late June, 18.7 million Bitcoins were available for trading.

For more information, speak to your relationship manager or visit us at The Private Bank.

Build a relationship to last a lifetime.

This is a publication of The Private Bank at MUFG Union Bank, N.A. (the “Bank”). This publication is for general information only and is not intended to provide specific advice to any individual. Some information provided herein was obtained from third-party sources deemed to be reliable. The Bank makes no representations or warranties with respect to the timeliness, accuracy, or completeness of this publication and bears no liability for any loss arising from its use.

Investment management services offered by the Bank in conjunction with its subsidiary, HighMark Capital Management, an SEC-registered investment adviser. Investments employing managed strategies: • Are NOT deposits or other obligations of, or guaranteed by, the Bank or any Bank affiliate • Are NOT insured by the FDIC or by any other federal government agency • Are subject to investment risks, including possible loss of the principal amount invested.