There’s some new guidance on early IRA withdrawals that pre-retirees should know about. It changes the interest rate on early withdrawals and allows a switch of method.

IRAs are wonderful planning tools, since they allow the accumulation of retirement funds on a tax-deferred, or in the case of Roth, tax-free, basis. With the ‘Great Resignation’ in full swing, many are asking when they can take money out of their IRAs as a rollover from their 401(k), 403(b) or 401(a) plans without incurring a penalty.

The basic rules. There are two important dates, or ‘goalposts’ on traditional (not Roth) IRA withdrawals: age 59 ½ and age 72. Between the ages of 59 ½ and 72, an IRA owner may take whatever they want from their IRA. When they make a withdrawal, it is taxable income. Obviously, withdrawals would interface with the IRA owner’s personal situation, like other income, taxes, and cash flow needs. Before age-59 ½ a withdrawal can cause an additional 10% tax on the early withdrawal other than in situations related to specific exceptions, which we’ll cover later in this piece. Required Minimum Distributions (RMDs) must begin at age 72 (actually, on April 1 of the year after you turn age 72). Missing an RMD can cause a 50% penalty, so IRA owners should be vigilant to take their RMD.

Early distributions. There is a 10% additional tax on traditional IRA distributions prior to age 59 ½. Here is a summary of the exceptions: 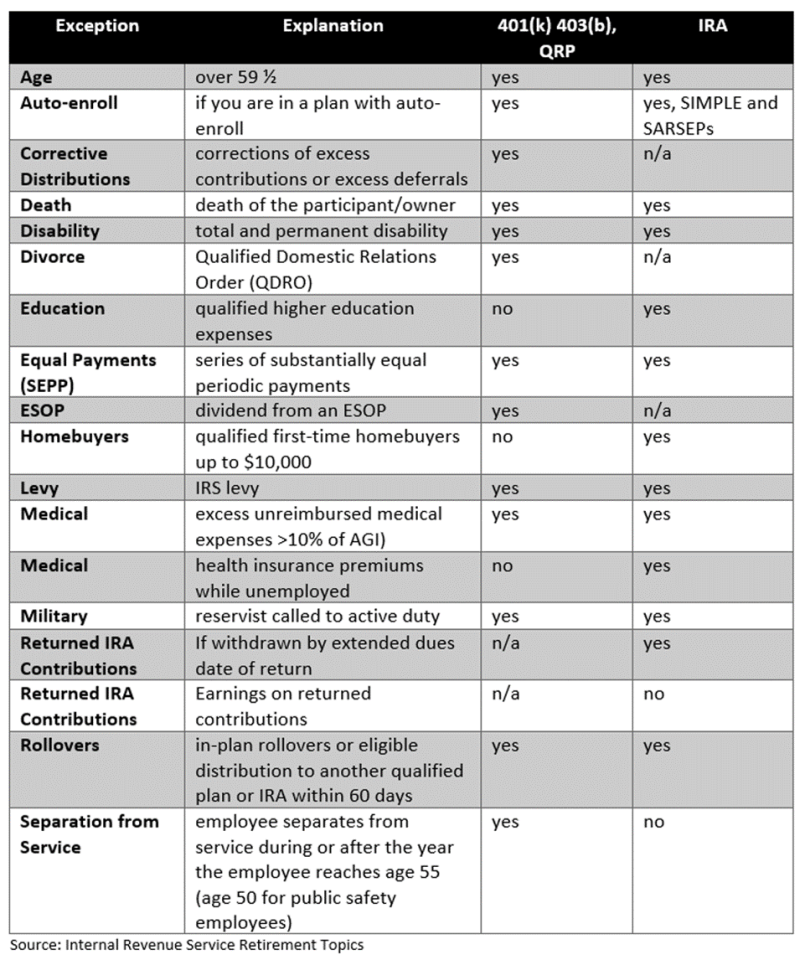 Of these exceptions, the IRS has recently given guidance on the ‘Substantially Equal Periodic Payments’ (SEPP) method, which allows an IRA distribution pretty much at any age.

SEPP: The early withdrawal loophole. IRS Code section 72(t) allows for an exception to the 10% penalty tax if the participant takes a series of substantially equal periodic payments from their plan or IRA. The rules are quite specific, and a 72(t) election should be calculated carefully. In addition, making a 72(t) election is a decision for the greater of 5 years or age 59 ½ (with a little respite from the new rules). Thus, a 55-year old must maintain their 72(t) until they reach age 60.

The IRS, in Notice 2022-06, has set out new guidelines on SEPP on any series of payments commencing after January 1, 2023, or any starting in 2022. The notice also allows person under a previous SEPP calculation to use the new tables and rules.

Three Methods of SEPP. There are three methods for using the SEPP exclusion:

The Notice also allows a taxpayer to make a one-time switch of their method and recalculate their new SEPP without a penalty. This can be advantageous if a person taking SEPP wants to change their withdrawal.

Multiple IRAs. Note that SEPP applies on a per-account basis and the SEPP ‘switch’ must be flipped on for the greater of 5 years or until age 59 ½, so using multiple IRAs can allow the flexibility to take another SEPP later, or wait until past age 59 ½. In our example above, the 56-year old may only need $24,000 a year, so they could carve about $361,663 into one IRA and take their SEPP at 5%, leaving the remainder to grow for later.

Bottom Line. Early withdrawals got a little easier from the IRS side and we have some flexibility in determining when and how to take early distributions without excess taxes.

This article was written by Leon LaBrecque from Forbes and was legally licensed through the Industry Dive Content Marketplace. Please direct all licensing questions to legal@industrydive.com.

The contents in this article are being provided for educational and informational purposes only. The information and comments are not the views or opinions of Union Bank, its subsidiaries or affiliates.

Worried About Passing Down A Big IRA? Consider a Charitable Remainder Trust (CRT)