Now that we’re entering the home stretch of the 2020 presidential election, taxes promise to be a point of lively debate between the two nominees, President Trump and former Vice President Biden.

Although neither candidate has released a formal tax policy as of yet, each has marked their preferred path pretty clearly. President Trump has generally expressed his intent to retain, and build on, his signature Tax Cuts and Jobs Act of 2017 (“TCJA”), while Vice President Biden has published various proposals giving us a solid sense of the direction he plans to pursue if elected.

Regardless of the outcome of the election in November, both President Trump and Vice President Biden’s proposals could look very different when—and if— signed into law. Any number of factors could influence their final form, both materially and in terms of timing. The state of the economy will undoubtedly be a major factor. However, perhaps the biggest influencer will be the results of the upcoming congressional elections.

With all seats in the House and about a third in the Senate up for vote, the question begs as to whether we’ll go into the new term with another “divided” government or revert back to a period of “single party control.” Since the House, Senate and president need to be in general agreement over the same version of legislation, the outcome will obviously have a big impact on the ultimate tax plan.

Here we give you each candidate’s stated proposals for key tax issues and compare them to current law. First though, let’s take a quick look at the overall direction each candidate has indicated they feel is most needed by the country at this juncture.

President Trump—moving on to the next phase of TCJA

Based on the budget blueprints the president has submitted to Congress for fiscal year 2021, he aims to preserve and expand on the TCJA. The expanded version, “Tax Cuts 2.0,” would make permanent the current individual tax regime and could potentially include a provision to extend additional tax relief to low- and middle-income taxpayers.

Former Vice President Biden is essentially working off the two-pronged premise that the country’s tax system needs to be modified to 1) better address growing income inequality, and 2) bring in additional revenue to compensate for the economic and financial fallout gripping the federal coffers. Directionally, his plan would roll back the majority of TCJA tax cuts, resulting in high-net-worth individuals and larger corporations paying a bigger share of the pie. According to the Tax Foundation, the top one percent of taxpayers would face the largest tax increase, amounting to an estimated 7.8 percent reduction in after-tax income by 2030. 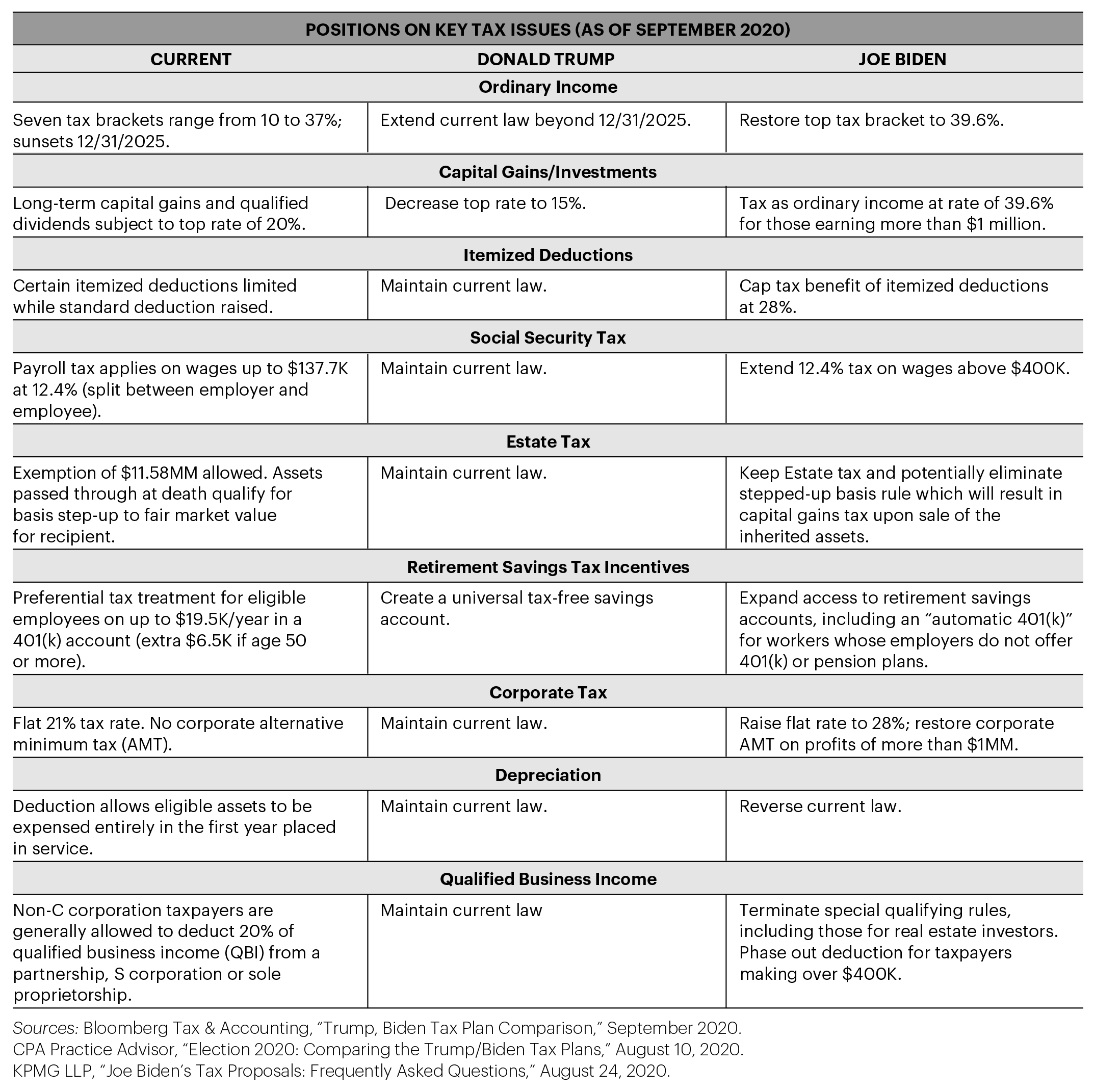 As election day approaches and the candidates’ tax policies change, we encourage you to reach out to your relationship manager for updates. It is not too soon to begin evaluating the two approaches and giving some thought to your own plan of action under the different scenarios.

This is a publication of The Private Bank at MUFG Union Bank, N.A. (the Bank). This publication is for general information only and is not intended to provide specific advice to any individual. Some information provided herein was obtained from third-party sources deemed to be reliable. The Bank makes no representations or warranties with respect to the timeliness, accuracy, or completeness of this publication and bears no liability for any loss arising from its use.  Wealth planning strategies have legal, tax, accounting and other implications. Prior to implementing any wealth planning strategy, clients should consult their legal, tax, accounting and other advisers.