Concerns over the spread of COVID-19, the new strain of coronavirus originally discovered in Wuhan China, has created a dramatic flight to safe assets in recent days. In this issue of Perspectives, we relay some of the latest information about COVID-19, how markets have responded and why investors should remain committed to their long-term investment strategy.

What we know about the Coronavirus (COVID-19)

According to the CDC, coronaviruses typically cause mild to moderate upper respiratory illness and are often associated with the common cold. COVID-19’s symptoms, however, are much more severe, posing an increasingly high risk for complications in older adults that can result in death.

Through February 25th, the World Health Organization (WHO) reported over 80,000 officially diagnosed cases across 34 different countries with 97% of those cases in China. Additionally, 2,700 people have died from the illness. Complicating the containment effort is the fact that the infected individuals can transmit the virus weeks before developing any symptoms.

As health officials respond to the rapid spread of the virus and mount an all-out effort to fight what increasingly threatens to become a pandemic, investors are contemplating how those efforts might impact a global economy that was trying to get its mojo back. At this stage, we can be sure the question is not ‘if’ the virus, and resulting containment countermeasures, will have an impact on the global economy, but rather, how significant that impact will be. Effects that we’ve seen so far include: 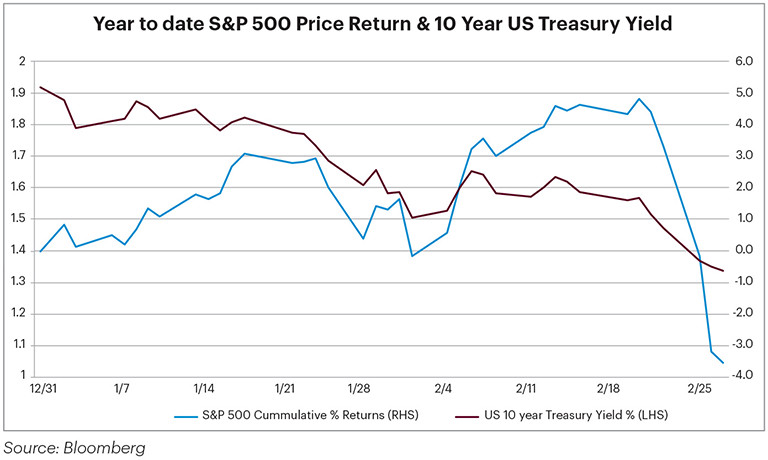 Risk of pandemics is inherently unpredictable, but certainly not without precedent. Severe Acute Respiratory Syndrome (SARS), Ebola and Zika are just a few of the more recent episodes that caused public health scares. While none of these examples ever became a meaningful threat to markets or the global economy, one cannot assume past is prologue. Circumstances of each outbreak are always unique. The 1918 Spanish Flu was by far the worst modern-day pandemic, infecting over a quarter of the world’s population with a 2-3% mortality rate, according to the WHO.

What the Future Holds for Investors

Could we be facing a similar fate with COVID-19? There is simply no way to know for certain, but modern medicine and precautionary measures are likely to prevent a repeat of such a calamity. In addition, many organizations report that new case growth in China is on the decline, vaccines are already in the works and seasonal changes are likely to limit the spread.

Over the next several weeks, we will carefully monitor both economic and health data for signs of potential longer-term damage. In particular, we will be watching consumer behavior, which has been a key pillar in the economy. Global policy responses, both monetary and fiscal, will also be crucial to the psychology of market participants. Negative developments on either of these fronts may warrant a more defensive posture in portfolios. For now, such a move would be premature.

As long-term investors, we must be careful not be influenced by the natural ebb and flow in markets. Headlines of this nature can be unnerving, but it is important to remember that investing involves potential long-term reward for assuming this type of risk over the short-term. For this reason, we advise our clients to remain committed to their long- term investment strategy and avoid the impulse to react to pockets of market turbulence.

Investment management services offered by MUFG Union Bank, N.A. in conjunction with its subsidiary, HighMark Capital Management, an SEC-registered investment adviser. Investments employing managed strategies: • Are NOT deposits or other obligations of, or guaranteed by, the Bank or any Bank affiliate • Are NOT insured by the FDIC or by any other federal government agency • Are subject to investment risks, including possible loss of the principal amount invested.

Wills, trusts, foundations, and wealth-planning strategies have legal, tax, accounting, and other implications. Clients should consult a legal or tax advisor.

This is a publication of The Private Bank at MUFG Union Bank, N.A. (the Bank). This publication is for general information only and is not intended to provide specific advice to any individual. Some information provided herein was obtained from third-party sources deemed to be reliable. The Bank makes no representations or warranties with respect to the timeliness, accuracy, or completeness of this publication and bears no liability for any loss arising from its use.