The results are in: Last year, for the first time, renewables generated more electricity than fossil fuels across the EU, spurred on by new solar and wind power projects.

Over the 12 months, renewable sources generated 38% of Europe’s electricity, while 37% came from fossil fuels. Investment in wind and solar power was the chief driver of decarbonization, with wind generation increasing by 9% and solar by 15%, making up a total of 51 additional terawatt hours (TWh) of renewable electricity.

The findings, released in January by U.K. think tank Ember and the German think tank Agora Energiewende, further showed that on a national level, Germany and Spain for the first time produced more electricity from renewables than from fossil fuels.

Following the U.S. move to re-join the Paris Agreement last week, the results offer further hope that a global green energy revolution could be possible even as the world struggles to combat the ongoing coronavirus pandemic.

It’s not all good news, however. In an analysis of their findings, the think tanks said that the energy transition is still taking place too slowly to achieve the EU’s target of 55% greenhouse gas reductions by 2030, and consequently carbon neutrality by 2050. Ember says Europe will need to add 100 terawatt hours of renewable generation every year to achieve its 2030 target—almost twice as much each year as the amount added in 2020.

While coal generation has halved since 2015 and declined a further 20% in 2020, gas generation dropped only 4% last year despite the lower energy demand associated with the coronavirus pandemic.

Nevertheless, the findings indicate that the EU’s electricity generation was overall 29% cleaner last year than it was in 2015.

Jones told Forbes.com that wind and solar were the primary reason for coal generation halving since 2015, leading to a rapid fall in CO2 emissions. 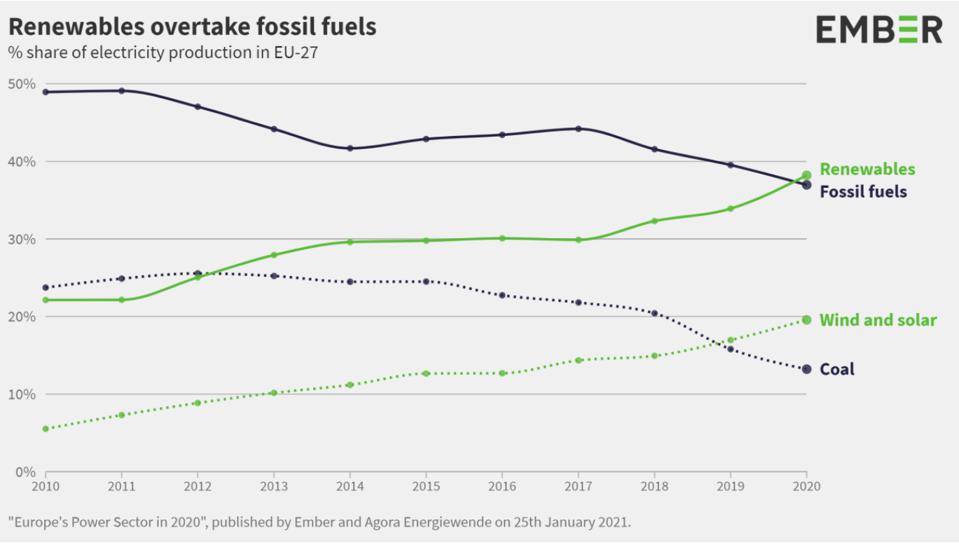 Data shows how renewable energy generation has increased inexorably since 2010 and is now accelerating, while fossil fuels have declined.
Ember

But could it be possible that 2020, with economic output severely harmed by the coronavirus pandemic, was simply an anomaly? Jones said it wasn’t yet clear.

“It's going to be close to whether there is a small rebound in fossil fuels in 2021 in Europe,” he said. “My money is for it to show another fall, and new wind and solar make up for the pick-up in electricity demand to pre-covid levels. If there is a small pickup in 2021, it will be small and temporary.”

Notably, nuclear generation also fell—by a record 10%. This was caused largely by the closure of nuclear power plants in Sweden and Germany, and reactors being temporarily being taken offline in France and Belgium. France, which derives some 70% of its electricity from nuclear, saw its nuclear generation drop by 44 terawatt hours, a decline of 11%.

Ember and Agora said overall generation from nuclear was expected to fall further throughout the 2020s as more countries, such as Germany, Belgium and Spain, phased out nuclear power altogether.

“Post-pandemic economic recovery must not slow down climate action,” said Patrick Graichen, director of Agora Energiewende, which co-authored the report. “We therefore need strong climate policy such as in the Green Deal to ensure steady progress.”

Graichen emphasized that, despite rapid progress on renewables, far more was required. “Almost a tripling is needed to reach the 100 terawatt hours of annual additions required for climate neutrality,” he said, noting that EU member state climate plans were currently only sufficient to produce an increase of 75 TWh through 2030.

So what is to be done about Europe’s remaining fossil fuel-hungry nations? Dave Jones said the picture was changing rapidly.

“If you asked that question three years ago, the answer would be Germany, Spain and Netherlands,” he said, referring to the countries that were until recently large emitters of greenhouse gases. “But they have collapsed coal generation already and they’ve got plans to phase it out to zero. Poland is close to now being Europe’s coal generator, and the Czech Republic is number three, so it’s clear these two countries need to step up now.”

For decarbonization proponents, there’s more good news on the horizon, with the International Energy Agency (IEA) forecasting a sharp increase in wind capacity installations across the EU in 2021, including large increases in France, Poland and Denmark. Solar is expected to grow even more rapidly, by as much as 16%, with huge solar photovoltaic facilities due to open in France and Germany this year. Overall, renewables deployment is expected to increase year over year until at least 2025.

This article was written by David Vetter from Forbes and was legally licensed through the Industry Dive publisher network. Please direct all licensing questions to legal@industrydive.com.

Get started with a Commercial representative

Get started with a Commercial representative