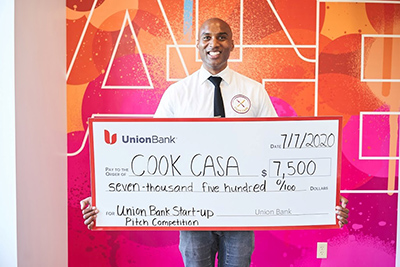 In partnership with CONNECT ALL @ the Jacobs Center and the City of San Diego, three entrepreneurs recognized

San Diego, CA (July 9, 2020) — Union Bank announced today the winners of its second annual start-up pitch competition. In partnership with the City of San Diego and CONNECT ALL @ the Jacobs Center, the virtual pitch competition is the culmination of seven months of training and mentorship for the second cohort in the program. CONNECT ALL @ the Jacobs Center is the region’s only business accelerator focused on serving low-to-moderate income and diverse founders. Through its foundation, Union Bank has supported the program since its inception in summer 2018.

“This accelerator program is helping young entrepreneurs turn their dreams into reality by giving them the tools to build a successful business,” said Mayor Kevin L. Faulconer. “The diversity of ideas and participants supported by CONNECT ALL @ the Jacobs Center’s program will help grow our local economy by allowing those businesses to get off to a fast start and put more San Diegans back to work.”

The first-place winner of the competition is Cook Casa, a start-up that provides on-demand chefs for the home, office or any location to create a customized dining experience. According to Cook Casa founder Anayo Nworjih, the food and restaurant industry is evolving to a peer-to-peer-based market that focuses on unique experiences not found in the traditional brick and mortar setup. Cook Casa, which also won the “Audience Choice Award” based on public vote, will receive a $7,500 cash prize to help support its continued success.

“We were really impressed by Cook Casa’s business model, the plan for responsible growth, and plans to keep local chefs employed. Anayo has identified a gap in the market and a need for on-demand chefs and responded by creating something perfectly suited to address the need,” said Gil Kennedy Union Bank vice president and a judge on the panel.

The second-place award went to Prenursing Smarter, a company that provides online test preparation to students applying for nursing school in the U.S. The company will receive a $5,000 cash prize.

Gifting Made, which specializes in powerful relationship-building strategies with high impact gifts to strengthen client loyalty, build trust and increase quality business referrals, came in third place and will receive a $2,500 prize.

In total, 11 companies competed in the virtual pitch competition. Each company had an opportunity to present its ideas via a five-minute, self-produced video pitch, and a panel of five judges viewed and voted based on a pre-established set of criteria.

This program is supported by Community Development Block Grant program funds provided by the U.S. Department of Housing and Urban Development to the City of San Diego, and private funding from partners, such as MUFG Union Bank N.A. and bkm OfficeWorks.

As of March 31, 2020, MUFG Union Bank, N.A. operated 348 branches, consisting primarily of retail banking branches in the West Coast states, along with commercial branches in Texas, Illinois, New York, and Georgia.  We provide a wide spectrum of corporate, commercial, and retail banking and wealth management solutions to meet the needs of our clients.  We also offer an extensive portfolio of value-added solutions for clients, including investment banking, personal and corporate trust, global custody, transaction banking, capital markets, and other services.  With assets of $135.0 billion, as of March 31, 2020, MUFG Union Bank has strong capital reserves, credit ratings and capital ratios relative to peer banks.  MUFG Union Bank is a proud member of the Mitsubishi UFJ Financial Group (NYSE: MUFG), one of the world’s largest financial organizations with total assets of approximately ¥336.6 trillion (JPY) or $3.1 trillion (USD), as of March 31, 2020. The corporate headquarters (principal executive office) for MUFG Americas Holdings Corporation, which is the financial holding company, and MUFG Union Bank, is in New York City. The main banking office of MUFG Union Bank is in San Francisco, California.