When the COVID-19 pandemic hit in March 2020 and the U.S. economy started to spiral, Jeff Holt and his husband, Peter West, braced themselves for their business to take a big hit.

Jeff and Peter own HEWN, a wholesale furniture and lighting showroom in San Francisco that caters to interior designers and architects who serve an upscale clientele. 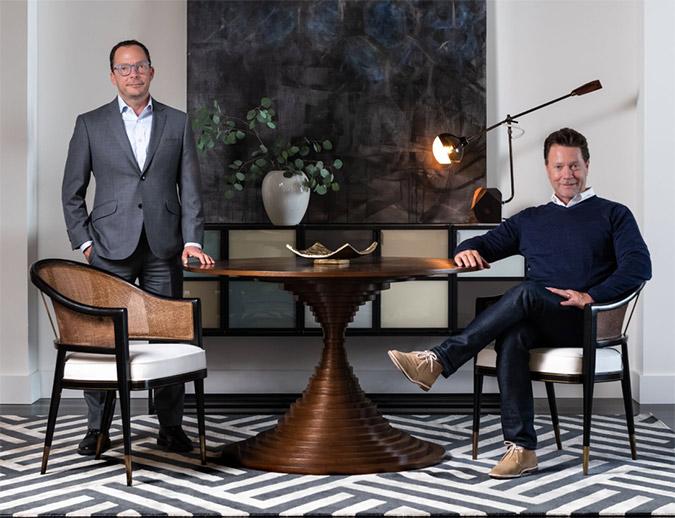 “Anytime there’s an economic downturn, we’re the first sector to go because we don’t sell anything you really have to have,” Jeff says. “We were prepared for that scenario to happen, but it turned out to be the opposite.”

When the pandemic started, Jeff and Peter realized the design community would need a place to connect and share concerns and support each other. It inspired them to launch a Facebook group for the Northern California Interior Design Community. The group quickly became a gathering place and opportunity for members of the community to share resources and crowd-source resolutions to shared challenges.

At the same time, many wealthy clients who weren’t hurt by the pandemic – or in some cases benefited from it – were spending more time at home, spurring them to remodel, redesign, or otherwise update their furnishings. Others were buying second homes in Sonoma, Lake Tahoe, Carmel and other locations, which also led to them wanting more furniture and lighting.

“We became very busy, and that has just continued,” Jeff says. “Last year was a great year for us, sales-wise, and the first quarter of 2021 was our best quarter yet.”

Jeff pauses and knocks wood, not wanting to jinx a good thing.

Jeff and Peter had years of experience in the home furnishing industry when they opened HEWN in 2012.

“The timing was perfect for us to open then,” Jeff says. “We were just coming out of a recession and rents were, quote-unquote, cheap, comparatively speaking, so we just did it.”

Jeff and Peter started banking with Union Bank when they launched the store, opening business checking and savings accounts as well as a business line of credit.

“We drew from that line of credit to expand in 2018, annexing space next door, knocking out the wall and expanding from 5,000 square feet to 10,000 square feet,” Jeff says.

Jeff says they chose Union Bank because they thought it would be more attentive to their needs as a small business.

“They’ve been all that and more,” he says.

They bank at the nearby 8th and Townsend branch managed by Christian Chavez and have close relationships with Christian, Gema Washington and William Zhou, who recently left the branch for a Small Business Banking Specialist role.

“We go to our branch every day to make deposits and it feels like a little family with Christian and Gema,” Jeff says. “We know each other by name and they will always ask us how business is -- or say, ‘Wow, business is great’ when they see our deposits.”