When Rodney Hood was attending the University of California San Diego School of Medicine in the early 1970s, he conducted a study about the origin of the sickle cell gene, which is more common among African Americans than other U.S. populations. UCSD is in the upscale and mostly white La Jolla community, so he traveled to the Black community in Southeast San Diego to get access to patients. 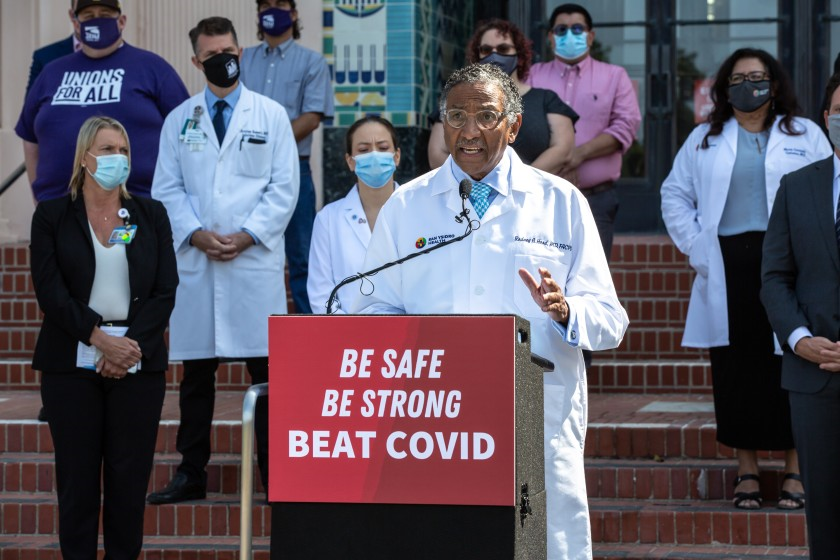 Dr. Hood was new to the city, having grown up in the Boston area, and when he spent time in Southeast San Diego, something clicked.

Dr. Hood was one of the first African Americans to get a Doctorate from the medical school when he graduated in 1973, the then-new school’s second graduating class. After a three-year residency with the UCSD health system – he was the system’s first African American internal medicine resident – he opened his own practice in what is now the Euclid Medical Center in Southeast San Diego.

Some 45 years later, he is still serving the community.

“I’m in the same place, same staff, same me, just under a different banner,” he says. “I know I’m getting old when some of the patients I’m treating tell me I was their mother or father’s doctor, too.”

Throughout his career, Dr. Hood has dedicated himself to African American community issues, focusing on racism in healthcare and health disparities among underserved communities.

He became active in the National Medical Association, which was formed in 1895 to support Black physicians, who at that time were often excluded from the American Medical Association. Dr. Hood led the NMA at the city and state levels before serving as the national president in 2000.

He also got involved in the business side of medicine. In the 1990s, he was the co-founder of the Multicultural Independent Physicians Association, a for-profit group of multicultural physicians serving underserved populations, helping those physicians negotiate better contracts with different health plans.

"My experience there led me to see the disparity that people in underserved areas not getting the health care they need, and that the solution was really at the financial and political levels, with community engagement being crucial.”

In 2012, Dr. Hood also formed the Multicultural Health Foundation, a nonprofit organization with a mission to bring health equity to underserved communities in San Diego County. It has received a number of grants for innovative projects.

When the COVID-19 pandemic hit in early 2020, Dr. Hood formed the San Diego County Covid Equity Task Force, which has grown to about 200 members, including state and local elected officials, university students and faculty, and others.

“When Covid first hit, patients were trying to get tested and finding out that testing places were not in the areas where they lived,” Dr. Hood says. “We advocated with the county and created the first two sites in underserved areas, testing up to 1,000 people a day.”

The task force has also focused on vaccine outreach.

“Blacks have the largest vaccine hesitancy and aren’t as willing to get vaccinated as other communities are,” Dr. Hood says.

When California Gov. Gavin Newsom in October formed the COVID-19 Scientific Safety Review Workgroup to independently review the safety and efficacy of any vaccine that receives FDA approval, Dr. Hood was one of 11 experts appointed to the workgroup.

“I look at each vaccine through the equity lens and whether vaccines are being distributed equitably to the Black community.”

His role on the workgroup has him meeting with scientists from Moderna, Pfizer, Johnson & Johnson and others, as well as other nationally acclaimed physician scientists in the group.

“It’s been interesting, that’s for sure,” he says, joking that he has caught “Zoomitis” from “too many Zoom calls.”

Dr. Hood has been a Union Bank client since 1996, maintaining both his business and personal accounts with the bank.

“My wife and I are big fans of Union Bank,” Dr. Hood says. “The bank has always given us excellent service.”

When his youngest daughter recently married a banker who works for another financial institution, Dr. Hood says he told his new son-in-law not to expect that he’d be moving all his accounts over.

“I told him that I may give his bank a few dollars, but I need to have a relationship with my bank,” Dr. Hood says. “I need to be able to walk into the bank and somebody knows who I am, and I’ve always gotten that at Union Bank.”