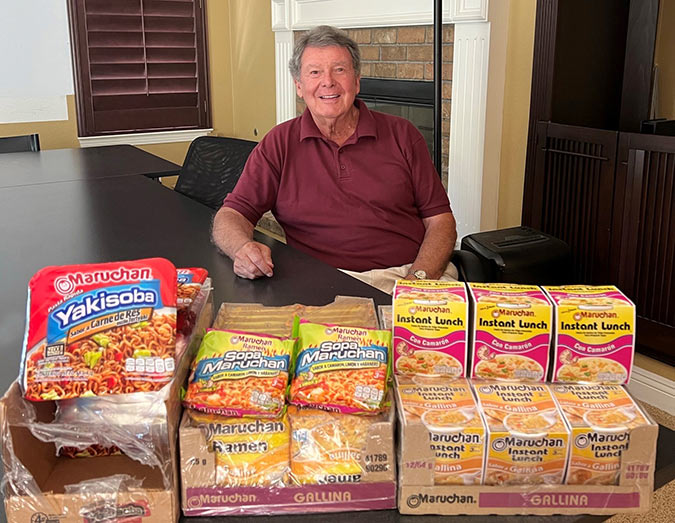 Some people build a business by using their noodle. Raul Gomez built his business using someone else’s noodles.

Maruchan noodles, that is. The dried ramen noodles popular across the United States originated in Japan and are also manufactured in the U.S., and Gomez’s company has been exporting them to Latin American countries for decades.

Gomez, who was born in Sonora, Mexico, and came with his family to the U.S. when he was very young, first started doing business in Latin America after graduating from UC Berkeley, where he received his bachelor’s and master’s degrees.

He spent years working in Latin America helping U.S. countries set up joint ventures, managing venture capital investments, advising on mergers and acquisitions, and working for large corporations that included Televisa, the largest TV network in Mexico. The work led to Gomez spending more than half of his time in Mexico City while his wife stayed in San Diego with their two children.

Being away from his family so much, coupled with the grind of traveling back and forth between the countries every week, led Gomez to take an opportunity working with a friend who had set up an exporting company in San Diego.

“He had worked in advertising in New York and was great at marketing,” Gomez says, “and I knew how to manage through regulations in Latin America. We made a great team.”

Together, they helped build the Maruchan brand across Latin America.

“Maruchan had been in the U.S. since 1970 and was doing well here,” Gomez says, “but they were a novel product when we introduced it to Mexico 25 years ago.”

Gomez and his partner were able to get a Spanish-language label approved, as well as import permits and trademarks in several Latin American countries, and the product began to become popular.

“In Mexico back then, there weren’t a lot of Japanese restaurants and people weren’t that familiar with ramen. ‘Maruchan’ is easily pronounced in Spanish and doesn’t sound Japanese. We were able to sell it because it is what we call a belly filler with the three Bs – bueno, bonita, and barato, Spanish for good, pretty, and cheap,” Gomez says. “We had the Spanish label, but we made it look very American because American products have high regard in Latin countries.”

Gomez used his contacts in the Mexican television industry to secure reasonable advertising contracts, and he and his partner created ads that aired frequently.

“We made the commercials funny and very basic in terms of who we appealed to and the actors we used,” he says. “People would recognize and remember the commercials. We made lots of commercials so that they’d be fresh and not so repetitive. It was a very good moment for us.”

“We can sell the products faster than they can produce them,” he says.

In 2003, after Gomez’s partner retired, Gomez launched Max InterAmericas, the San Diego-based export management company he runs with his son and son-in-law.

Gomez became a Union Bank client when he launched Max InterAmericas and has stayed with the bank since, maintaining business and personal accounts. He partners with Small Business Relationship Manager Paul Johnson.

“It’s been a great relationship,” he says. “We don’t need a lot of services, but when we do need them, we need them done quickly. Union Bank has always been there when we needed them.”

While Maruchan is Max InterAmericas’ largest account, the company manages exports for a number of others, including exporting beers made by Stone Brewing to Mexico and ensuring the beers are kept refrigerated every step of the way.

Gomez talks about retiring soon, maybe next year, but he, his son, and his son-in-law are working on new ways to expand the business, including developing software that can help companies better manage logistics and distribution, and perhaps launching a private label line of low-cost cookies and candies to sell in Latin America.

“We are always looking at high-volume business opportunities,” Gomez says. “There are lots of ways we can continue to grow.”