When Bobby McDonald was a child living in the Watts neighborhood of Los Angeles, it didn’t take long for him to figure out what he was going to be when he grew up. Yet he never imagined it would lead to a life of community service, influencing people and communities to help young Black students.

“In elementary school, I sold the most doughnuts and PTA memberships, then in a junior high sales contest, I won two tickets to (Brooklyn Dodgers great) Roy Campanella Night at the L.A. Coliseum,” McDonald says. “I already knew that sales was what I was going to do.” 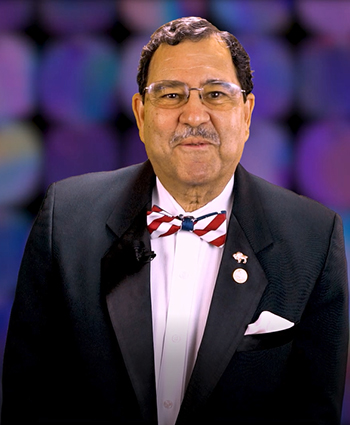 McDonald began a career in sales with sporting goods companies, first at Uniroyal, where he was a national sales contest winner three years in a row. He also worked for Adidas and was that company’s top seller for two years.

McDonald began getting active in community service, and used his position with the Fullerton alumni association to create scholarship programs for African American students at the university. It was through those efforts that he got involved with the Black Chamber of Commerce of Orange County in 1990.

“We did a scholarship fund through the chamber and that morphed into the Black Chamber Education Fund,” he says. Support for the fund, which provides guidance, educational programs, and scholarships to youth in Orange County, grew as people and colleges joined the historical endeavor.

McDonald left the corporate world to work for the chamber, and has been its president and executive director since 2000, and one of the most influential people helping communities across Orange County.

“The chamber has been an avenue for me to really get deep into the community and do something for the schools,” he says. “The Black Chamber was founded in 1984 and is the oldest ethnic chamber in the county, so we have to take the lead.”

The chamber has major relationships with all of the Orange County colleges, providing opportunities for young Black people to further their education, he says.

McDonald has been involved in numerous community and veteran organizations, including leading the Orange County Board of Supervisors Orange County Veteran Advisory Council. Former California Governor Arnold Schwarzenegger appointed McDonald to the California Community College Board of Governors, where he created the board’s Veterans Advisory Committee and launched the California Community Colleges Veterans Summit, which has run more than 10 years.

McDonald served on the Public Broadcasting System board of directors and has appeared on several PBS programs. He has received numerous awards and honors for his community service.

“The community has been very, very good to me,” he says.

During his time at the chamber, McDonald has watched Orange County transform into a minority-majority population and seen Orange County cities elect their first Black mayors.

McDonald has been a Union Bank client for more than 20 years, maintaining Black Chamber accounts as well as his personal accounts. He is a client of the Tustin branch, led by Branch Manager Davina Samuel.

“I’m not the biggest fish in the pond – maybe the loudest or most visible – but Union Bank has always been loyal and fair to me,” McDonald says. “I believe in people who believe in me.”