When a customer asked Roz Pennington, owner of The New Townhouse restaurant in Los Angeles, whether Roz’s restaurant has a program to provide food for the homeless, the initial answer was no, but Roz has since turned it into a yes. 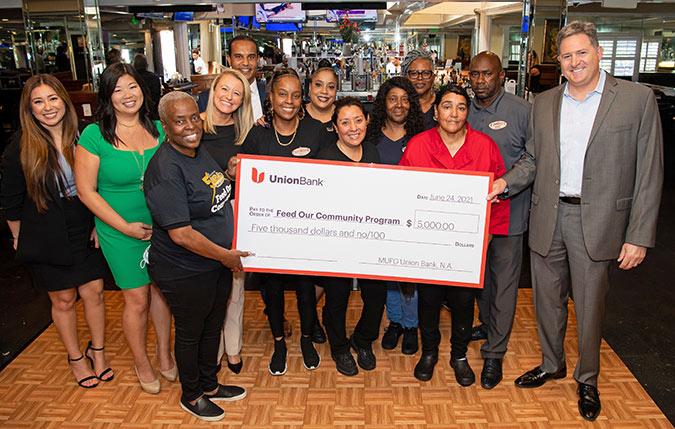 Roz is on the board of directors for the city’s Black Business Association, and submitted a proposal to the board to support a program where Black restaurant owners would provide hot meals to people in need. The board approved the proposal and provided a $2,500 grant for the meal donations program.

The customer who initially asked if there was such a program for feeding the homeless donated $500, and Roz began working with restaurants to create a menu.

Roz had been part of the city’s Great Plates program, which provided meals to older adults in need before ending in April, so she already had the facilities to package large numbers of meals.

“The funds we had were enough to provide meals for 500 people,” Roz says. “We packaged them up and took them to churches that were set to deliver the meals to people. It was their first time doing hot meals and they were ecstatic.”

When Roz participated in the recent small business panel discussion hosted by Union Bank, Small Business Program Manager Devon Barrack announced that the bank was donating $5,000 to the Feed Our Community program. The MUFG Union Bank Foundation has also supported the Black Business Association over the years, including a $35,000 grant as part of the bank’s Community Recovery Program.

The bank’s donation, along with other donations submitted to the program through its website, will be used to fund additional meal donations, Roz says.

“I’m planning to write proposals for additional grants and use the Union Bank funds as a starting point,” she says. “I can see this getting really big.”